Exciting news!  The S.T.A.T. Project is expanding to day cares and now has a curriculum for children K4-6th Grade!  And our hope is to start foreign language study early, giving kids a great foundation and cultural exposure before high school.

“Why?”, because foreign language acquisition is no longer a luxury–it’s becoming a requirement as we live in a rapidly growing global market.  The S.T.A.T. Project wants to provide that first step, that first opportunity, in the hopes of laying a strong foundation for the future.

So, with that in mind we are running a Spring promotion! From April 25- May 15,  if you have a child in day care, or know a group of children that may be interested in Spanish lessons, and refer them to  S.T.A.T. Project, you will get one free lesson and 3 additional lessons at %50 off (this also applies to groups).

If you have any questions please contact Megan @ statproject.megan.moody@gmail.com OR 864.832.7828

I’ve heard many students say, “Spanish people talk so fast!”  And I’ll admit, when I was first learning Spanish, I thought that too.   However, there is a reason for all the ‘speed-talk’, it’s called Phonetics–simply put Spanish is pronounced different and sounds different to the English speaker’s ear.

Unlike English which is spoken in a series of stressed and unstressed  syllables (like English Lit. class, explaining iambic pentameter, da-daa-da-daa-da-daa), Spanish speakers pronounce every single syllable, so it sounds faster.

Maria Elena went to the store

So, next time you’re channel-surfing and happen to see Maria and Juan in an overly-dramatic and emotional argument, don’t fret because you’ll know that their speedy dialogue isn’t just caused by their lover’s spat! It’s just the Spanish language 🙂

Notes from Talk at  California Association of Bilingual Education Conference,

“A language is a gift” so those who can should share it with others!

I understand that many people may feel that learning a language is not needed or essential for everyday life.  And I suppose I understand that thought.  I’ve heard others say, “We speak English so everyone should learn English.”  I’d have to say I agree with that to an extent.  I had the wonderful opportunity to travel abroad to Argentina–they speak Spanish there, so I spoke Spanish.

BUT a language is so much more that words, it’s a mode of expression that expands your vocabulary, thoughts, and exposes you to a different culture.  And that’s something that everyone should have the chance to experience!

As they say in La ARG (la hermosa Argentina), “tengo ganas…” which means, loosely translated, “I have the desire (to win).”

(I have the desire to share Spanish with others.)

and in sharing that desire, I feel like I am winning!  Learning a  language is a beautiful thing…it’s not just a skill, it’s an opportunity to expand your cultural horizons and gives you the chance to meet others!  Shouldn’t we all have that opportunity?? 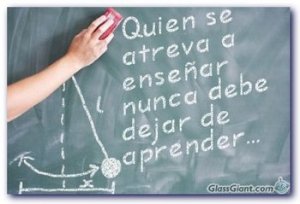 And to answer a student’s question

How do you say ‘shelf’ in Spanish?

thank you Barnes and Noble for your inspiration!

I tutor high school, college students and adults in Spanish. I can assist in any aspect of grammar, composition, pronunciation, conversation, etc. I also provide editing, formating and...

Questions? Comments? Requests? Get in touch.
Contact Now
Brought to you by